British digger maker JCB has signed its first deal for its revolutionary pothole fixer with a council which helped develop the machine. 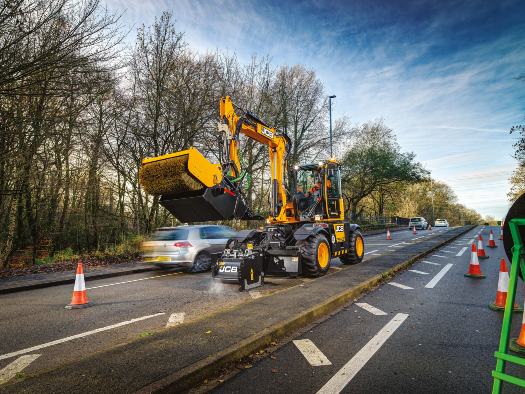 The JCB PotholePro at work in Stoke-on-Trent

Councillor Daniel Jellyman, cabinet member for regeneration, infrastructure and heritage at the city council, said he was very impressed with the trials which took place last year and as a result the PotholePro was now being deployed on the city's roads.

He said: "We know how important road maintenance is to our residents and that is why we are at the front of the queue for one of these fantastic machines. The fact that it's made by JCB means we are also supporting a local business that employs a lot of people from our city, which is a really nice added bonus.

"We're currently investing £25 million - one of the biggest ever sustained investments in the city's highways, with potholes filled and pavements and roads resurfaced on a daily basis. This machine is another weapon in our armoury as we make sure our road network is maintained to a high standard for residents, businesses and visitors, which is vital to rebuilding our economy in the wake of the coronavirus pandemic.

"At a time when every penny counts for local authorities, we're delighted to have been at the forefront of developing and trialling this new machine. We can't wait to get our hands on it and put it to work on the city's roads."

JCB launched the PotholePro - a machine that can repair a pothole in less than eight minutes and at half the cost of current solutions - earlier this year.

"The council has been involved right from the very early stages of its creation. The team has worked with us throughout the development process and also took part in trials last year. They've clearly seen the benefits and believe in the machine which as manufacturers is great news."

The machine will be supplied in the next few weeks by JCB dealer Gunn JCB. Between now and the end of June, a fleet of PotholePros are being demonstrated to potential customers across the whole of the UK and Ireland.

The machine's development has been personally led by JCB Chairman Lord Bamford. He said: "Potholes really are the scourge of our nation. Our country is quite rightly fixated on this dreadful problem and as a British manufacturer I am fixated on finding a solution. We simply cannot allow our road network to continue to be blighted by potholes. JCB's solution is simple and cost effective and fixes potholes permanently, first time."

The launch of the PotholePro follows a vow from Chancellor Rishi Sunak last November to invest £1.6bn to fix potholes in Britain and 'level-up' uneven roads. Shock figures from the AA reveal more than £11bn-worth of potholes need repairing across the UK. Tests with local authorities and contractors show the JCB PotholePro can complete a pothole repair in less than eight minutes - equivalent to 700 potholes per month. With a 40km/h travel speed, the machine can rapidly relocate between sites without additional transport costs.

The PotholePro allows the contractor or local authority to cut the road defect, crop the edges and clean the hole with one machine - mechanising jobs traditionally done by pothole gangs equipped with jack hammers, floor saws and brooms. Mechanisation halves the cost of pothole repair and allows four times as many holes to be repaired per day.

JCB's PotholePro is equipped with a 600mm wide planer and integrated dust suppression system, enabling the operator to plane a full carriageway from the kerb, without repositioning. The machine also comes with a sweeper/bucket and hydraulic cropping tool, allowing a uniform hole to be prepared by the operator from the comfort of their cab. Mechanisation also protects highways workers the from dust, noise and vibrations of hand tools.

Councils get a request to fix a pothole every 46 seconds and more than £8.1 million was paid out in compensation to drivers last year for vehicle damage caused by potholes.